After landing at Zeebrugge, they entrained for Bruges, and the next day marched 15 miles to Ostend to cover the Cavalry disembarking. Then they entrained for Ghent and marched to Zomergen to cover the withdrawal of the Belgian Army and BEF when they could not hold onto Antwerp. With the German Army trying to outflank the British Army and ‘Race for the Sea’ to sieze the ports, they marched to Thielt, then Roulers (Roeslare).  They left Roulers for Ypres in the morning, and German troops arrived by evening.

That evening they took over outposts on the south of Ypres on the Menin and Messines roads, where they encountered some Uhlan Cavalry groups scouting the land and eventually marched to Kruiseik on 19th October. 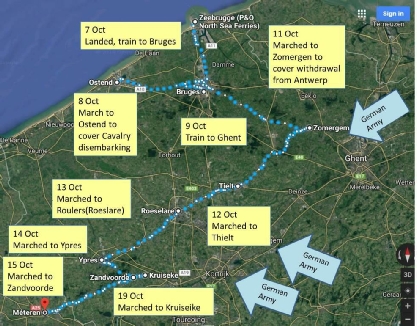 This is when the First Battle of Ypres began, with the battalions of the 7th Division pivoting to face Southeast to attack Menin on 18th, then back again on 19th when they obtained information on the strength of the opposing armies. 1 Bn Grenadiers were in 20 Brigade, at the south of the red line above Kruiseik. 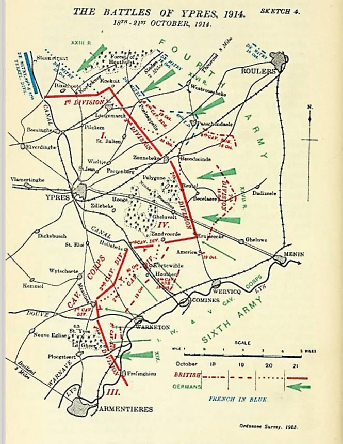 This is the map from the official ‘History of Great War’ by JE Edmonds in archive.org

Because of the intense fighting, no Battalion War diaries were kept from 20 Oct to 2 Nov, but this book helps.

On 20 Oct the German army attacked the 7th Division and got within 50 yards of their front line. There were 20 Grenadiers in 1 Bn killed and three in other Grenadier companies, so 1 Bn took the biggest hit. On 21 Oct they were improving their trenches, but were subject to machine gun fire and artillery bombardment. William Albert and one other died, though there were likely to be more wounded as well.

This shows the difficulty of recording and recovering the wounded and fallen due to the intensity of the fighting.