Marshall Frederick was born in 1897 in Bacton to James 285 and Harriett Spinks. The name Marshall is common in this family, and comes from the maiden name of Anne Marshall, the wife of the earliest traced ancestor in this tree. 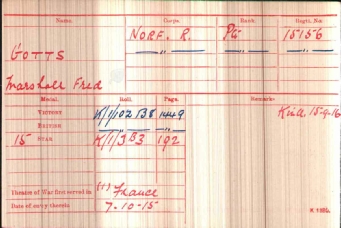 His Soldiers’ Effects entry gives a little more information, but only that it is paid to his mother Harriett rather than his father James.

The 9th Battalion was a Service battalion set up for this war, hence the ‘S’ by the regiment on the Soldiers effects list. It was formed in Sept 1914 in Norwich and landed in Boulogne France on 30 Aug 1915. It became part of 71st Brigade of the 6th Division. The division suffered from a lack of equipment and a lack of trained officers and NCOs to command the volunteers. In late June 1915 they moved to Aldershot for final training and they proceeded to France, landing at Boulogne on the 30th of August 1915.

See further details of the place of battle on the next page.

This is his grave at Guillemont cemetery

CWGC only has a reference by initials:

Buried at Guillemont cemetery. He would have been 19 when he was killed.

His Service number is actually 15156, so this has been transcribed incorrectly.

This photo of Marshall Frederick, known as ‘Fred’ has kindly been provided by Olwen Gotts his niece. She found it on eBay!