Thanks to Ian Gotts of Kings Lynn for the details and the ‘In Memoriam’ cards. Both these men were brothers of his grandfather.

Maxwell William enlisted at Norwich in 1914 and was initially engaged on coastal defence duties with the 6th Cyclists Battalion of the Norfolk Regiment. At some point (in 1915 or July 1916), he was transferred to the 2nd Northants infantry battalion and sent to the Western Front. Twenty years old, while serving under 8th Division, he was killed in action on Monday, 25th March, 1918, and was buried at Pargny British Cemetery on the Somme, a cemetery made after the Armistice by concentrations from the surrounding battlefields. The majority of the burials are those of officers and men whose resistance at the Somme crossings on the 24th March, 1918, materially helped to delay the German advance. Maxwell’s grave is marked with a headstone inscribed: ‘Buried near this spot’.

Arthur Walter (223) and Maxwell William (224) GOTTS, sons of William and Alice GOTTS of 100, Century Road, Southtown, Great Yarmouth, both lost their lives in Flanders during the Great War. 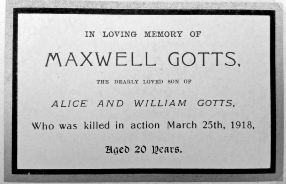 This is the ‘In memoriam’ cards that Ian has for Maxwell.

One extra piece of information is that Maxwell’s Soldier’s Will is one of the few that can be bought from the Probate Office.

See the next page for details of the battalion diary  and map for those days.