This tree has some of the earliest spelling of Gotts ie recorded as ‘Gottes’. Richard 1041 is the top of the tree, married to Margaret 1042 who died c 1600, and a brother Robert 1043 of Walsingham parva. This linkage is based on Richard’s will in 1537 makes a bequest to both a son Robert and to a brother Robert. The latter is said to be of Little Walsingham, which points to a connection with various GOTTS families known to be living at Walsingham in the early 16th century.

Richard and Margaret’s son Robert 835 of Ryborough married Elizabeth 836 Hunt, and he has the crest attributed to him. They had children: 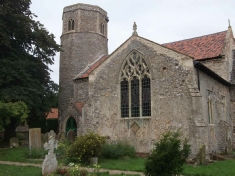