John 605 Gotts and Margaret Lawrence: their children in Roughton:

NB The records found in English Marriages in Family Search and Find My Past show events happening in Felthorpe, however this is a long way away and when you check the original images you can find they are from the Felbrigg registers. Whether this is a systematic error across all Felbrigg records is not known, though it has been reported to FamilySearch.

We have a small tree starting with John 606 baptised in Alby 1632 son of George.

He married Margaret 605 Lawrence of Roughton in N Walsham 1655. They had family in Roughton and they both died in Felbrigg in 1694 and 1701/2 respectively.

When you look at the parishes, Alby to Felbrigg is only 5 miles with 5 parishes on the way! The main road between them passes through Roughton now and probably did so back then. This tree will probably fit into a bigger tree, but as yet we don’t have the connections. There are several parishes nearby where Gottses have lived, including Aylmerton, Gresham, Northrepps, Thurgarton, so there are plenty of possibilities. 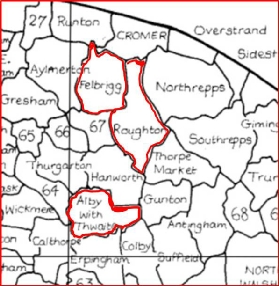 Thanks to Ian Gotts of Kings Lynn for this