The presence of recent Gottses in Suffolk is mainly due to the Bacton family of builders setting up a business called ‘Cubitt and Gotts’ at the  Station Works, Westerfield, Ipswich. From its website:

“Cubitt Theobald (as it is now known) can trace its origins back to 1903 when Charles Cubitt and William Gotts set up business at Westerfield, Suffolk. The company has developed over the years becoming Cubitt Theobald Ltd in 1998 when Cubitt’s merged with sister company Clement Theobald and Sons Ltd. “

It was William Marshall 356 who started the company, and there are several records for work done by them on churches. His brother George John 711 is also in Ipswich in 1901 as a builder’s foreman.  His cousin John William Marshall 714 Gotts was also a stonemason who worked on churches in Suffolk.

There is an earlier record of Gottses in Suffolk, but it is limited to one person: John Gotts

Recent correspondence with the owner of the hall has shown that there is no crest, certainly not one of the Gotts family.

They identified that John Gotts was a farmer, and that he left it by will or through marriage to John Wiseman, who took up residence in 1813.

John was a farmer in North Suffolk, close to the Norfolk border , and not a rich man retiring to the country from London.

There is a will for John between 1790 and 1813, though I have not found either a death record or a will

Potentially there is a marriage of John Gotts or a sister/niece into the Wiseman family which would provide a reason for leaving the property to John Wiseman. Again, I have found no evidence of this yet.

I can find no local parish records for the name Gotts around the Hawkedon area, and there is nothing in Family Search or Ancestry, or PCC wills for Timworth of Suffolk or even London for a John Gotts.

There's more to this family not yet unearthed.

Also we have a link to Flickr with a description of the Hall. 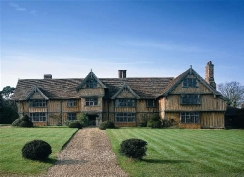 The Earliest Gotte(s) record is in Suffolk