Mark & Hannah Webber married in Stanford Rivers in 1773, and had children:

We know of their existence through the will of Mark 2641, their marriages and some census information. A lease for Mark 2641 mentions him as Mark the Younger, inferring his father is called Mark as well.

Jesse 2638 Gotts married twice. His first wife was Mary 2639 Roach, and he married her at St James Westminster in 1816. Their known children are:

So far, the earliest known member of this tree is Nicholas 3568 who married Esther, though we don’t know when. We have the baptisms of the children in Fryerning, Essex:

The baptism records change in Fryerning, indicating that Esther is dead and Nicholas has remarried a Margaret: 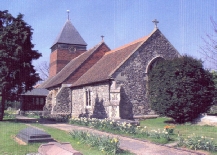 Mary Roach died in 1825, and Jesse married Elizabeth 2640 Roach in 1831 in St Clement Danes, Westminster. There are no known children, though Elizabeth would be 50 when they married.