Attacks and harassment of Gottses during wars

Because the name Gotts sounds German, there have been some incidents when we have been at war with Germany.

My father got stopped by the new village policeman after WW2 and was disturbed by him wearing a belt from a German soldier with "Mein Gott" on the buckle. (IanG-STA)

Barbara Adams has provided this article from a newspaper in Bristol around 1914/5.

In wartime many baseless and often mischievous rumours are current. One which has been scattered broadcast in Bristol is the alleged foreign nationality of Supt. Gotts, the respected chief of the Fire Brigade. He has been here for 28 years, and previously seven years in the London Fire Brigade. Supt. Gotts is British born and bred, and is proud to claim Cromer, the beautiful town in Poppyland, as his native place.

His wife is also a native of the Norfolk seaside resort. Supt Gotts comes from good yeoman family, and the name is quite common on the East Coast. His father was for many years the verger of Cromer Parish Church, and one of Supt. Gotts’s treasured possessions is a eulogy of him by the encumbant

Here is the original:

18 Attacks on Gottses during the wars 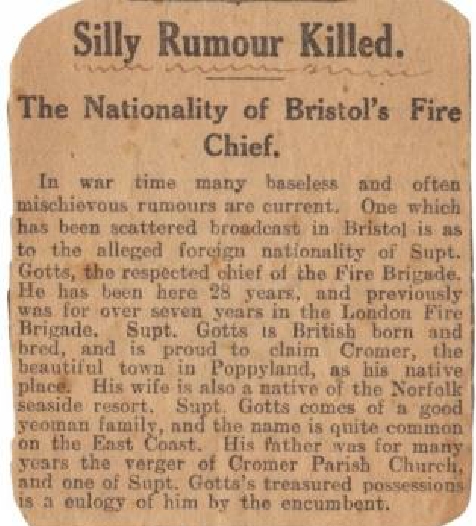