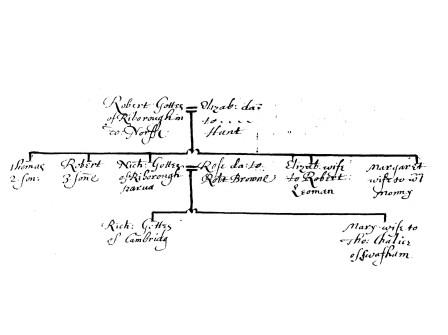 The Gotts family coat of arms appears in the Visitations of the Heralds to Cambridge in 1575 and 1619. There are four books in the Harleian Society Collection in the British Library which have copies of the tree and the arms: this is the nicer one. The crest also appears in Fairbairns Book of Crests.

The definition of the arms from Burkes General Armoury is:

A greyhound's head erased argent, eared collar, or. A line is attached to the ring of the collar, the end gathered up in a knot.

A griffin segreant, or, on vert

The tree shown in the Visitations book belongs to Robert Gotts of Ryborough in Norfolk.

It was applied for by Richard Gottes, his grandson, in Cambridge

The tree is shown under the families section tree 036. The family had connections with London. Late of Clements Inn, Richard was admitted to Inner Temple 30 June 1578 and called to the Bar November 1590.

There are children in London, but there are no known connections from this tree to Gottses living now. 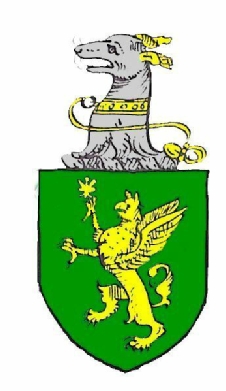 There is a problem with these copies, in the British Library, however, as they do not match that of the original in the College of Arms. They show the fleur de lys in the top left corner, but I have discussed this with York Herald at the College of Arms and he confirms that the original shows the fleur de lys being held by the griffin, and it is not a mark of difference. I have duly amended this image to show this.