Problems with spelling the surname GOTTS

When you aren’t literate yourself, how can you make sure that someone has written down your name correctly?

So with many generations of Gottses earning a living through their hands in one way or another, there are many records with mis-recording of surnames.

So to claim his pension from the Miners’ Pension fund they had to apply to the Registrar in Norwich to provide the correct details. On one side of the form the family gave the information as they knew it, and on the other the Registrar provided the correct information from Norfolk and this document acted as a birth certificate.

This example in the 1911 census was indexed as GOTTS, but when you check the marriage & births it is Murby-GOTTO, another similar name. The ‘s’ and ‘o’ confusion occurs regularly. 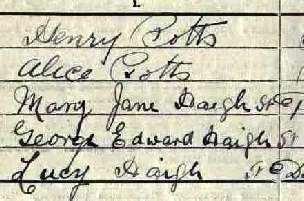 This is also in the 1911 census and indexed as GOTTS. But when you check the letter shapes against other parts of the form you realise it is ‘POTTS’

The Ellis Island records show the origin of some people with the surname Gotts as Russian and Prussian, so it is possible that some US families may originate from there.

There is a manuscript in the British Library for Thomas Gottes dated 1634, paying for half a house for his daughter’s marriage. On it are one signature by him and his name written three times by the lawyers and their clerks. His signature is Gotts, the others say ‘Gottes’, ‘Gots’, ‘Gotte’.

And to crown it all, it is indexed in the BL as ‘Thomas Gotte’ of Gray’s Inn Road!

A will of 1529 has the spelling GOTTS of the testator at the top of the will, and GOOTIS in the margin for indexing, so the general level of education and grammar ends up with the spellings being used interchangeably.