His service record shows Frederick was a ‘Rullyman’ working on moving the tubs in the coalmine, so he had not taken over running the greengrocery. Yet later in his record it says when he enlisted he had been employed by Allenby Bros, South Boulevard, Hull as a carting contractor for 18 months.

One morning in April 1917 he reported in a state of sickness at 1st General Hospital, Newcastle-upon-Tyne. This suggests he was training at Alnwick Castle in Northumberland, where there was a big training camp assembled at the start of the war.  It also suggests he had been sick for some while at the camp before being referred by the army MO.

When you read his service history, especially his discharge, it shows he had a rough time of it. In his recommendation for discharge dated 29 March 1917 it says:

“I have the honour to put to you on the condition of 5/45007 Pte Gotts F for the purpose of taking steps to obtain his discharge owing to mental and physical deficiencies.

On his enlistment Jan 9th he was put in the ranks and it was found he was unable to perform his ordinary military duties, owing to lack of intelligence and slowness of movement.

He was removed from ranks and placed before a Medical Board on the 20th inst & categorised "C3". Since then he has been placed on several fatigues which he has provide quite incapable of performing.

He appears to have no control over himself & in fact he is unable to even control the call of nature. Owing to this nuisance he is objectionable to the men who have to line with him - they also having to dress & wash him.

He is slow in understanding questions and answers irrationally. Sluggish in his movement & talks in a childish manner. Capt Adwick 81 Training Reserve Bn informs me that a man has to dress Gotts, that he cannot be kept clean, that he defaecates down the stairs of the billet & often does so in his clothing. That he stands & does not seem to understand commands on parade or elsewhere.

Captain Mather 81 Training Res Bn Gateshead confirms the above and states that it is impossible to make anything of him.” 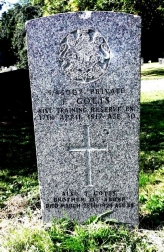 This is his grave in Hull Western Cemetery.

At least he has a proper headstone after this sad experience.

The inscription at the bottom shows his brother Tom is buried there in 1924.

Frederick died in hospital 17 4 1917, and was shown to have ‘Acute Lobar Pneumonia’.

Whether he had this when he started training or acquired it in the early days of training will not be known, but it is very difficult to diagnose.

This has been the cause of his behaviour, nothing else like a congenital deficiency.