George had been in the field a long time. His Medal Roll card shows the qualifying date as 9 Oct 1914, ie that is when he entered France. The 1st Battalion went through le Havre in August 1914. He clearly served there, and was eligible for the 1914 star medal. 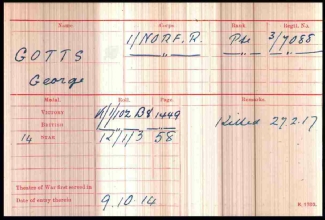 The 1st Battn Norfolk regiment was in many of the key battles: 1914: Mons, and the retreat, Aisne, Bassee, Messines, first battle of Ypres,

In Oct 1916 they moved to Festubert 30 miles north of Arras and near Bethune, and would have still been there when George was killed at Richebourg Avoue, near Neuve Chapelle. This is only 4km away from Festubert.

Source of this is here:wartimememoriesproject

The Soldiers Effects states he went missing on or since 27 Feb 1917, and the place being Richebourg L’Avoue. The effects went to Hilda Shreeve, sole legatee in December 1917. At the minute I have no idea who Hilda Shreeve was. My understanding is that George wasn’t married, but whether she was his fiancee we won’t know.

We now know what happened to George, and it is explained on the next page. 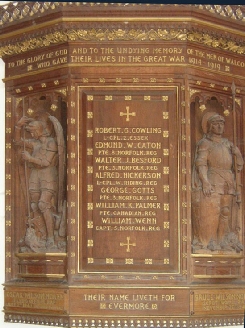 George is also remembered on this memorial in Walcott church