Charles Herbert was born in 1882 to John 437 and Matilda Rump in Costessy. 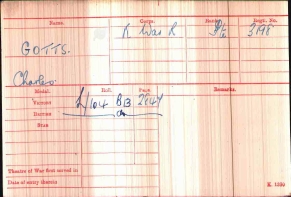 His Medal Roll Card shows him as Charles but his Service number shows he is actually Charles Herbert.

He died at Neuve Chapelle, half-way between Ypres and Arras.

The Soldiers effects entry is interesting: it shows his effects being paid to Alice Gotts, sister-in-law in July 1915. The question is, who is Alice Gotts?

It is answered by the next entry for the War Gratuity, which identifies Mrs Alice Gertrude Parker as his sister-in-law. This can only be Frances Alice Gertrude nee Haddon, the wife of Albert Walter 1148. She remarried in 1916 to Edward Parker, hence the change of surname. There must have been a close tie between Albert and Charles, as Albert had a son in 1910 who he named Charles Herbert, and Alice had been named as legatee before Albert died in late 1916. Whether it was known that Albert may die early, and made her the legatee instead of his own mother we don’t know.

This is Vivienne Hayward’s write-up for Charles Herbert Gotts in her article in the Nuneaton and North Warwickshire Family History Society magazine describing life in the trenches  shown here:

He apparently enlisted at Nuneaton, Warwicks and was living at Stockingford, Warwicks. 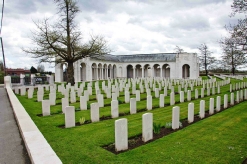