In 1908 George was sent to Canada under the Self Help Emigration Society program. His sisters Jessie and Martha followed in 1909. When war broke out George joined the 2nd Battalion Canadian Expeditionary Force (CEF) in Sep 1914, and by October was training on Salisbury Plain. We have online access to George’s Service record  and the War diaries at the Library and Archives Canada to see where he went. 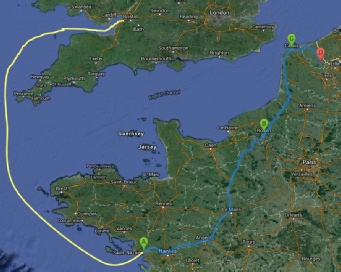 George was promoted to Sergeant in April 1915, and in November he was attached to the 1 Canadian Division HQ as a guard. This would have kept him out of the immediate fighting, and could be why he survived the war.

Having said that, he was in the field through the rest of the war, which had an effect on him. 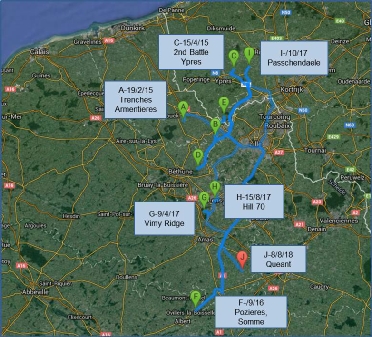 Battles the Canadian 1st Div were involved in include:

In Feb 1915 they embarked at Avonmouth for a 4-day voyage to St Nazaire, followed by a train journey back through France via Rouen and Calais to Armentieres. This seems a very circuitous route, and not to George’s advantage: many men were sick on the ship, so George must have fallen and been knocked out as he ended up in St Nazaire Hospital for 9 days with concussion of the brain.

George spent the next four years being involved in many of the major battles, starting with 2nd Battle of Ypres, where the 2nd Battalion CEF lost over 5000 men in the battle of St Julien. They found that the Canadian ‘Ross’ rifle was not right for infantry attacks, the leather kit could not withstand the weather and battle conditions and their fighting tactics led to heavy losses, so they re-equipped with British equipment and trained in more successful tactics. Later in the war they were renowned as crack troops. 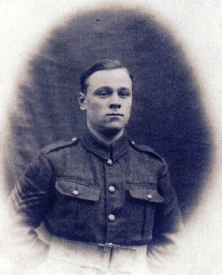