During the war, George married Evelyn (Eva) Beagley in Hampstead in November 1916. His Service record shows when he had 10 days leave.

In February 1919 he is in Gt Warley, Essex, one of the big army bases, waiting to be demobilised. In August 1919, George was seen by a Medical Board, and graded as ‘B2’, which means ‘fit for service abroad but not general service’. So he was not fit for fighting, but he did not need any treatment. He was recommended to be repatriated to Canada.

At the time, he is listed as a Clerk, and he requested to be demoted to Corporal, though the reasons are not recorded. We will not know if  he was struggling to cope with his lack of fitness, despite only being 26.  So potentially the four years of being close to the front line took its toll on him.  Some Canadian military experts suggest that it is more likely that his Sergeant’s promotion papers may have got lost or misplaced, and it was simpler for him to accept the rank of Corporal; his pay was only adjusted from when he took the lower rank, potentially the point the Army realised they did not have the paperwork.

On 11 July 1919, his record shows he was ‘Mentioned in Despatches,’ one of a few soldiers to receive this. This means his name is mentioned in the London Gazette. This award is in the list of Canadian soldiers on 11 July 1919 says “ The following is a continuation of Sir D. Haig's Despatch of 16th March, 1919, submitting names deserving of special mention:

They have a memorial near Vimy Ridge, one of their major successes.

These huge towers look out East over the plain towards Douai. At the front is this statue of ‘Canada bereft’. On the memorial are the names of 11,000 missing Canadian soldiers. 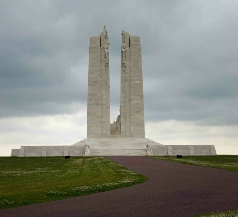 Being ‘Mentioned In Dispatches’ meant George was allowed to wear the Bronze Oak-Leaf Cluster.

George’s daughter offered a most telling comment about why he received this award: she said that “George had the (MID) Bronze Oak Leaves because he was a despatch rider while he was based at HQ - taking messages to forward positions on a motorcycle, and that this was a dangerous role.”

Given he had been doing this for four years, he clearly deserved the award and it is not at all surprising that his health suffered, through severe battle fatigue.

Thanks to Brian Crawford and Lakefield Heritage Research for their help on George’s history.