In 1911 they were living at Battle Hill, Walker, where William Henry was a Waggon way man (keeping it repaired), John William aged 17 was a Coal miner, putter (filling tubs), and his 16 year old brother Robert was a Coalminer, drawer (taking full tubs from the workplace to the haulage and bring back empty tubs). Presumably they worked in the Walker pit.

According to his service record in FMP he enlisted 1 May 1915, aged 18. They were living at 36 Cullercoats Street, Byker, Newcastle.

On 27th July he was in the 3rd Reserve Battalion training at Blandford. He seems to have had several spells in hospital with bronchitis. He had leave from 28 August to 3 September before he was drafted into Nelson Battalion in October 1915 and then in November he was on his way to Gallipoli to fight. On 22 November he developed bronchitis and was invalided to Dardanelles hospital on 30 Dec, from the Hospital Ship Grantully Castle on 3 Jan 1916, and subsequently to Alexandria on 7th April. Finally, he was invalided back to England on HS Dunluce Castle.

Following some Physical Instruction training, presumably to make him more fit, he returned to duty at Devonport 14 October 1916. 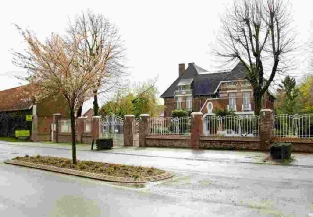 This is the mayor’s house in 2016: the sign says ‘Manoire de Gavrelle’, now a hotel.

12 December 1916 he was drafted back into the Nelson battalion as a Royal Naval Reserve battalion on 23 April 1917 as part of the British Expeditionary Force.

On 17th April 1917 the Battalion was on the West side of Gavrelle, about 11km North east of Arras, preparing to attack it. On 23rd April they attacked at 4.45am in four waves, moving through the town against machine guns, until eventually they were held at the Eastern edge on the red line by the mayor's house.