Because of the loss of life at Gavrelle and other battlefields where RND men died, there is a memorial erected at the western end of the village of Gavrelle. 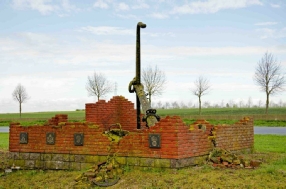 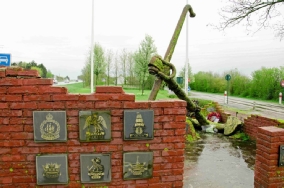 This imaginative conception expresses the idea of the Royal Naval Division anchored within the ruins of the village which they defended. Scattered around the walls of the ruin are a number of shells lying amongst the fallen bricks. There are plaques to all the units of the Division on the outer wall. Top right is the badge for Nelson Battalion, the ship Trafalgar. The battalion wore cap badges with this emblem.

23 April 1917 This is the day when John William was listed as Killed in Action.

On 5th May 1921 his dog tag was returned from IWGC(predecessor of CWGC), presumably when he was moved to his final resting place.

He is buried in the Orchard Dump Cemetery, Arleux-En-Gohelle, which is about 5 km North-West of Gavrelle. 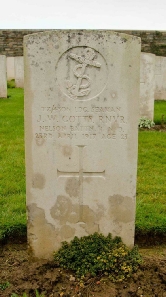 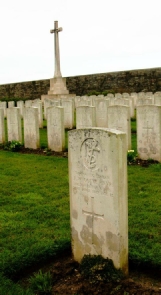