Abraham was born in Q4 1899 to Edith Eleanor 1563 Gotts in North Ormesby, Middlesbrough. Many people in the town worked in the iron works, and Edith's father Henry worked there. When Abraham was born, Edith would have been 17 and unmarried, and in the 1901 census she is still living with her parents and Abraham is listed as her brother. She married Brammer Allport in Q4 1901 and in the 1911 census we see Abraham listed as Abraham Allport, though he has lost a couple of years to make things look better.

Brammer was also a labourer in the foundry, and in 1901 Edith’s mother was living up the street with two lodgers who are blast furnacemen. We don’t know if Brammer was the biological father of Abraham, though it is possible in such a close-knit community.

He was a private in the 2nd Highland Light Infantry Battalion, service number 69871. In April 1919 men from this battalion and many other units were drafted into the 1st Battalion Oxford and Bucks Light Infantry, (known as Grogan's Brigade) to make up the North Russia Relief Force which included French and Italian soldiers.

The reason was that there was a significant stockpile of war material which had been given to the Russians at the start of the war, but when the Bolshelviks made peace with Germany there was concern that these may fall into the wrong hands.

He would have sailed in May and arrived at Murmansk in June 1919. The troops were poorly supplied and unprepared for the dense and swampy forest terrain, there was little or no suitable transport, the 'white' Russians force had no overall plan or the motivation to carry it out even if there had been one.

The 20 year old Pte. Abraham Gotts, 2nd HLI was the last soldier to die in North Russia. He died of wounds on 27th September 1919, sustained in a failed raid on a Red Finnish (Finns sympathetic to the Soviets) hideout on 23rd September. (c/o1914-18 InvisionZone)

We have a photo of the Murmansk cemetery and his gravestone there, c/o the War Graves Photographic Project. 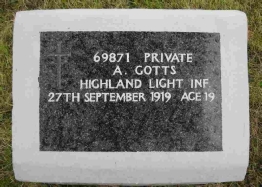 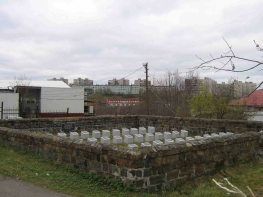