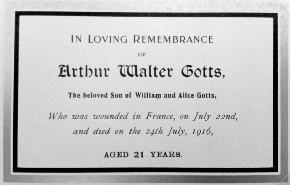 Arthur Walter enlisted at Great Yarmouth in 1914 with the Suffolk Regiment and was transferred to the 17th Bt Lancashire Fusiliers, a ‘Bantam’ battalion for undersized or physically unfit men. The unit landed at Le Havre towards the end of January 1916 and served with 35th Division. A twenty-one year old private, he was fatally wounded on Friday, 22nd July, 1916 and died two days later. He was buried at Dive Copse British Cemetery, in the village of Sailly-le-Sec, about twenty kilometres east of Amiens. In June 1916, just before the Somme offensive, the ground north of the cemetery was chosen for a concentration of Field Ambulances, which became the XIV Corps Main Dressing Station. A small wood close by was known as Dive Copse, after the name of the officer commanding the Station.

Arthur Walter (223) and Maxwell William (224) GOTTS, sons of William and Alice GOTTS of 100, Century Road, Southtown, Great Yarmouth, both lost their lives in Flanders during the Great War.

Somewhere in foreign soil they’ve laid him, In sound of battle’s din;

No loved ones stood around him, To bid a last farewell.

Tears from his loved ones at home are shed, And sorrow rends their breast

This is the ‘In memoriam’ card that Ian has.

A text inside the card:

Thanks to Ian Gotts of Kings Lynn for the details and the ‘In Memoriam’ cards. Both these men were brothers of his grandfather.

See next page for maps and details of the actions