The Battalion diary for the days when Arthur was wounded show he was at Bernafay Wood, which is near the village of Longueval, on the Somme. It is 300 yards west of Trones Wood, the scene of many attacks and deaths by both sides. Bernafay Wood was a jumping off point for some of these.

After the initial advances on 1 July 1916, there were several battles during July. Around 19th July Bazentin Ridge, just west of Bernafay Wood was one such battle, followed by periods of entrenchment, attack and counter-attack around these areas.

On 21st July, the Battalion was at Bernafay Wood, holding the line from there to Trones Wood and southwards to Maltz Horn Farm, but sustained three men wounded in action. It seems that Arthur Walter was one of these. 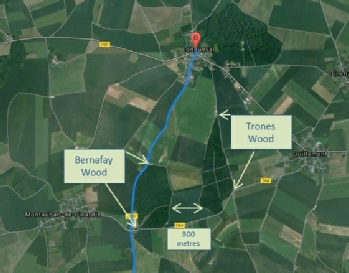 Hover over to magnify

The Battalion still holding the front line which was subjected to heavy fire from hostile artillery. Casualties as follows:

The front line was again heavily shelled throughout the day. The Battn was relieved by the 23rd Bn Manchester Regiment about 11pm and proceeded to TALUS BOISE. Casualties during the day were as follows:

Relief complete and Bn in TALUS BOISE by 2am.

Casualties for this day were as follows: