I was searching the records of the West Surrey (Queen's) Regiment, which are held at Surrey History Centre. I found a reference to a Matthew Gotts who was held a Prisoner of War:

I already had Matthew's regimental number from Nick Gotts, who is Matthew's grandson, who knew that Matthew had been a POW. Matthew says:

“ He died when I was a year old, so I have no memory of him; and I think I recall my father saying he (Matthew) had actually been treated pretty well - although of course that may have been what he chose to tell his children even if it was not true. Apparently, a lot depended on who the camp commandant was." 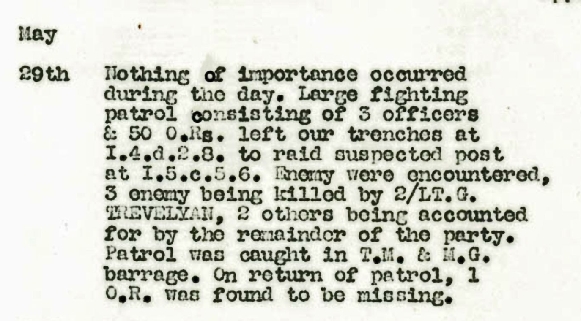 Nick remembers his father mentioning Ozone Villas as his first home. And it appears that prisoners were formally sponsored by people at home, presumably to send food parcels etc.

The Battalion diaries for the Royal West Surrey Regiment have been put on line:

This leads to the website: http://qrrarchive. where you can select the battalion and date. I started at 16 July and worked back. The first missing person I came across was 29th May, with an Other Ranks soldier reported missing. There may be earlier ones, but the trouble is that OR (Other Ranks) don't seemed to be named. This is the entry: