Albert Edward was a son of James 324 Gotts alias Nurse and Sarah Hailes. His name is in the July-Sep quarter 1895 civil birth records, but the POW records have his birth as 21/6/1896.

He was living at 13 Maltby St, North Ormesby with his parents in 1911, a ‘fettlers labourer’ in a pipe foundry. In other words helping take the bits of iron that slightly leak into the mould off the outsides of pipes to make them smooth.

There is a Medal Roll card for him which appears to show him entering the war in France on 21st  July 1915. 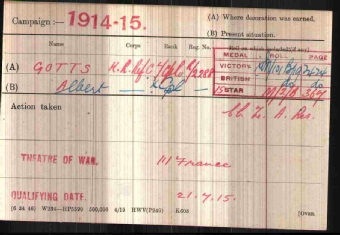 There is a red Cross card dated 24/3/1918, with his Service number 2288, rank of Sergeant 18th KRR. There is an 'A' at the end of KRR, though I am not sure why. The date is the date of his capture. The PA references are extra sheets which show which POW camps he was in. 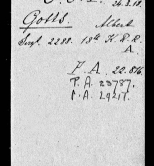 This record is for Munster camp, which was at the Munster racecourse. (Wikipedia), and is in Northwest Germany, near Dortmund. It shows his Service number 2288, rank of sergeant, 'A' company 18th KRR, captured at Flemicourt (Fremicourt) 24 March 1918. Born 21/6/1896 at N Comesly (misreading of N Ormesby!) Address 13 Malthy St ( Maltby St), N Comesly, Middlesborough.

This address confirms exactly who Albert is, though it raises one or two other issues. It says he was in 18th Battalion, but this was a Service battalion and did not go to France until 1916. It was fighting in the Battle of Bapaume, which Fremicourt is close to.