John was the third child of John Gotts & Louisa Broadribb, born in 1890 in Lewisham, South London.

On 5 March 1914 he joined the Royal Army Service Corps, Special Reserve, who were on seven days notice for a rapid deployment. At the time he was an omnibus driver with the London General Omnibus Company, based at the Old Kent Road, having been that for 18 months.

John was mobilised on 7th August 1914 at Bristol, after Britain declared war on Germany on 4th August, was in France by 16th August and at Mons by 22 August .

Given his occupation as an omnibus driver with the London General Omnibus Company, I had wondered whether he was transporting troops to the front, but someone has found this was not the case.

John’s occupation in France appears to be ‘hay driver ‘(source: Army Form Z 22) with the 1st Cavalry Division Supply Column (57 and 58 M.T. Companies A.S.C.) (source: Army Form B 108 marked disembarked n r 1 Cav D S.C. which was an abbreviation for nominal roll 1st Cavalry Division Supply Column). He stated he was once concussed when starting his lorry. It seems certain he drove lorries in France and not buses as the Cavalry would not have needed buses which were used for infantry. 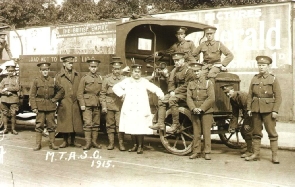 This is an Army Supply Corps lorry in 1915, so this could be the style of lorry John was driving, filled with hay for the cavalry horses.

See the next page for where John would have been in France.