Hilton Kenneth 2891 is the brother of Eric Aubrey, who also served in the South Pacific.

In the early months of 1942, Japan enjoyed a crushing superiority in the air, and it was Lae and its neighbouring airfields that were the objects of the first Japanese attack on New Guinea. Lae and Salamaua were bombed on 21 January 1942 by 100 planes, but the land forces did not enter the territory until 7 March, when 3,000 Japanese landed at Lae. There were landings too at Salamaua, followed on 21 July by further landings at Buna and Gona on the east coast in preparation for a drive through the Owen Stanley Mountains across the Papuan peninsula to Port Moresby. The vital stage of the New Guinea campaign dates from that time. Lae became one of the bases from which the southward drive was launched and maintained until it was stopped at Ioribaiwa Ridge, a point within 60 kilometres of Port Moresby.

Details of the battle are on the next page

Thanks to Pat Upsall for the additional information on this page 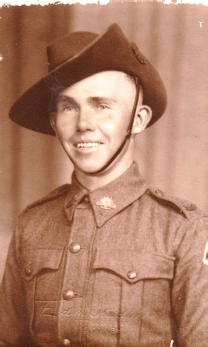 Pat Upsall, who is cousin to Hilton, adds: “HILTON KENNETH GOTTS was born on  6 October 1911 at Sackville Reach NSW and christened at St Matthews C of E Windsor NSW on 4 December 1911.   He enlisted on 4 September 1941 in the 2/1 Australian Infantry Battalion and died of wounds in New Guinea on 6 February 1943.” 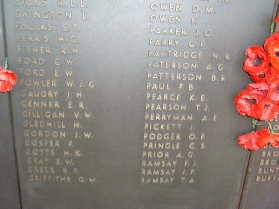 We don’t have an image of his gravestone, but the inscription on it is: