Pat Upsall is first cousin to both Eric Aubrey and Hilton Kenneth, and has provided me with some extra details and photos.

“ERIC AUBREY GOTTS was born on 20 July 1909 and christened at St Matthews Church of England, Windsor, NSW on 16 August 1909.  He enlisted on 29 October 1941 in the 25th Australian Infantry Battalion and was killed in action on 31 March 1945 at Bougainville in the Solomon Islands.  He was buried at Port Moresby (Bomana) War Cemetery.”

Port Moresby is in Papua New Guinea (PNG). According to CWGC, the Japanese invaded PNG and took Port Moresby in late 1942.

Early in 1942, and almost without resistance, the Japanese established a considerable force and developed a useful base on Bougainville, the largest and most northerly of the Solomon Islands. This they held until Americans and Australians began offensive operations towards the end of 1943, when Bougainville was the only one of these islands remaining in Japanese hands. By August 1945, when the Japanese surrendered, most of the island had been recovered.

Those who died in the fighting in Papua and Bougainville are buried in PORT MORESBY (BOMANA) WAR CEMETERY, their graves brought in by the Australian Army Graves Service from burial grounds in the areas where the fighting had taken place.

The inscription on the headstone is:

HIS DUTY FEARLESSLY AND NOBLY DONE EVER REMEMBERED” 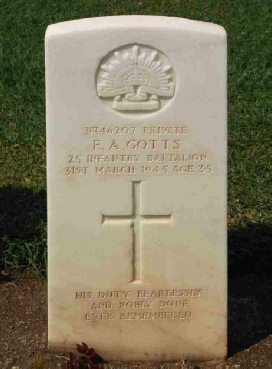 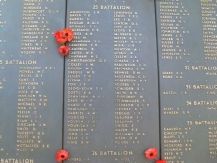 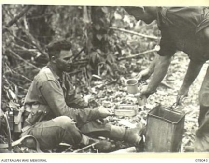 (Hover over to enlarge)

Thanks to Pat Upsall

Thanks to Pat Upsall for the additional information 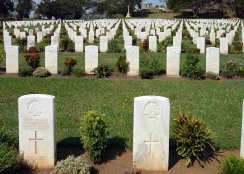