Three days after landing in Singapore, 5 RNR and 6 RNR were fighting at Ayer Hitam. Leslie George (4232 #034) was on patrol on 23 Jan, and was shot in the head. He was left there with 5RNR unable to recover him due to the fighting, and he was found the next day by another part of the battalion, who took him back to their base. It seems they were then captured by the Japanese, and he was operated on in a tent hospital by his Regimental doctor, with no anaesthetic. They did not know if he would live through the night, and because they did not want to distress all their other patients with his cries of pain they put him outside in the monsoon rain.

Eventually Leslie arrived in Singapore, but it is not clear exactly when. He recovered from his wounds, but he had been left with one arm with limited movement, so to get food his job was to hold rice in a bowl and grind it with the end of a bottle. ‘No work, no food’ was the order by the Japanese.

He spent three years doing this in Changi Prison camp as his way of staying alive. 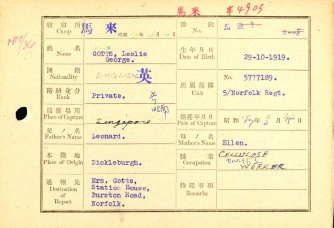 His occupation was a Cellulose worker, which may have been to do with explosives.

Many cards have a reverse side which show first camp and movements, though Leslie’s only has a first entry and a liberation entry, so he was in Changi all the time.

His family would know he was wounded and missing, when these were posted in Casualty Lists on 23 Jan and 30 March 1942. The Red Cross struggled to get information, and they only have a telegram dated 1 May 1943 stating he was held in Changi.  The casualty list stating he was now a prisoner was not posted until 27 May 1943, another year later!

This problem would apply to all the POWs because many of the Japanese camp commanders were indifferent to sending any information to the West.

After Leslie was released, he spent much time in rehabilitation. David Randle, who has helped with this item, believes it was Papworth Hospital in Cambridge as it was the closest. It is possible that he was transferred to Stoke Mandeville, the recent facility which started in 1944 for spinal injuries. The reason for this is that he married a nurse in Aylesbury, and their children were born in Aylesbury and Oxford.

We cannot know the terrible impact of the suffering in Singapore, though David points out that in the early days of having their children any Japanese-made toys Leslie found he would break, yet his wife drove him round in a Toyota car later in life.

Thanks to David Randle for help with this item.

The Japanese Index card shows his details, and the symbol top left is for Changi camp. They are all dated 15 or 16 August 1942, so it appears that the Japanese were pushed into recording the details of POWs.

They all show the date of capture as the fall of Singapore: 15 Feb in 17th year of the Emperor.