Continued on Next pageNext page

This James Atkinson Gotts is my father’s first cousin, also named after their uncle who died on the first day of the Somme. He was born in 1917 to John Robert Gotts & Lizzie Francis.

Jim is on the left with his father John Robert seated and his brother Eddie on the right.

Though both brothers were born in Northumberland, probably Seghill where John Robert was a miner, in 1939 they are both lodging in Wembley, both single working as bottle workers. 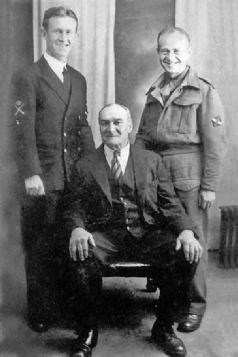 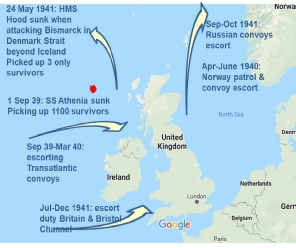 We don’t know if Jim saw the sinking of HMS Hood on 24 May 1941, or at least the oil slick and only 3 survivors they rescued from it.

HMS Electra in the North Sea

NB: hover over or tap on images to enlarge

Jim’s son Alan has shared his service record, which shows Jim signed up 11 July 1940, and was called up for training on 26 Sept 1940. The Royal Navy records note that the dates where shown are based on the pay record, and may not reflect the real dates for joining the ships stated. We know that he was on board the destroyer HMS Electra when it left for Singapore on 25 October 1941.

This reference from the HMS Hood Association has the memoirs of Jack Taylor who was on HMS Electra that day.

Despite its name, this uboat.net website shows what happened not only to HMS Electra during this period, but also the actions in chasing and sinking the Bismarck. Details are compiled from Admiralty sources in The National Archives.