Japan had rapidly conquered Malaya and Burma, but such rapid expansion gave it problems with its supply chain. To get weapons, food etc from Japan to support its efforts in Burma the only way was to take it by sea around the Malay peninsula, which was still vulnerable to British submarines. In May 1942 they decided to cut the time at sea by joining existing railways in Burma to those in Malaya and Bankok by building 419 km of new railway using POW and forced Asian labour. 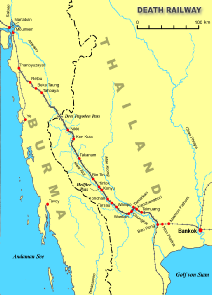 Edwin and Arthur both worked on these parts of the railway. Click on the map to see the original at www.cofepow.org.uk

From Singapore 1000km to the south, they were packed into metal boxcar trains with little food and no sanitation, so their journeys would have been terrible. Even more POWs especially Australians, were taken to Burma and worked from that end coming south.

Edwin moved camps 9 times. This table shows the details from his post-war interview. The Summary is a link to the ‘Britain At War’ website which gives you a better understanding of life for each camp. 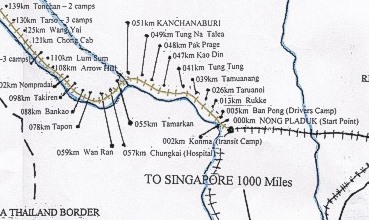