From there I could identify John within tree #091, going back to Charles Gotts & Sarah Dunn who married in Norwich in 1771.

During WW2 John is recorded as 'Civilian Dead' on 11 November 1944, in Shooters Hill Road. It appears that this was when early V2 rockets with huge destructive power were starting to be fired at London when the Brook Hotel in Shooters Hill Road, Greenwich was completely destroyed by a direct hit.

The attack also destroyed the top deck of a number 89 bus and the nearby ambulance station as well as damaging the Brook hospital. (source: "Steeped In History" by David Lloyd Bathe)

There were twenty nine fatalities, many of whom were passengers on the bus. What we don't know is whether John was in the hotel, hospital or on the bus.

The eldest of the six sons of William and Alice GOTTS, George was born at Hemsby on the 27th March, 1884.

George was a sawyer for many years at House of Jewson, until an accident in 1924 cost him his right hand. He then worked as a storeman for the Company until the outbreak of the Second World War.

Yarmouth was, of course, in the front line of air attack and, during a series of single raids during the early hours of the 30th May, 1942, high explosives fell on the Power Plant at the Yarmouth Mill, completely destroying the Plant and demolishing surrounding buildings.

Two bodies were recovered from the ruins of a shelter in a yard which received a direct hit, one of them that of George, who had been on fire guard duty on the premises at the time. 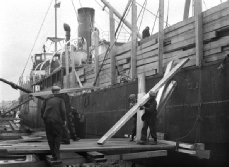