The Dieppe Raid was an allied attack on the then German-occupied port and took place on August 19, 1942, and resulted in 3500 men out of 6500 being killed without achieving any objectives.

The map above is from this website:  https://cdnhistorybits.wordpress.com/2015/08/18/why-was-dieppe-a-failure/ which looks at the aspects where the attack failed. It was clear that the Germans were ready for an attack because of the aerial bombing prior to them landing, and that the BBC had recently broadcast that civilians should move inland from the coast!

Eric was attacking Red or White beach, both of which were well-defended by machine guns, and they were trapped between the sea and the defended sea wall in crossfire from either side.

The soldiers were buried in the Canadian cemetery at Dieppe, Hautot-sur-Mer, on the hill behind the town. 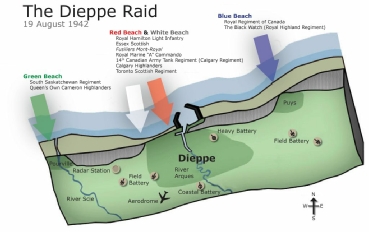 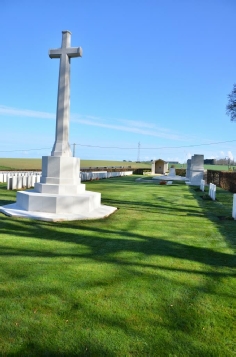 This is Hautot-sur-Mer cemetery looking North This is Eric’s headstone:

“ Deep in our hearts

A memory is kept

Of one we loved

And will never forget”