Edwin Charles 813 #038 was born in Wroxham, Norfolk, 1 January 1921 to Robert & Gertrude Gotts. He enlisted in the 6th Bn Royals Norfolk Regiment (6RNR) on 1 May 1939 and was a Lance Corporal by the time he reached Singapore. He was originally destined for Libya with 18th Division, but diverted en route. He is likely to have been involved in the fighting at Ayer Hitam with the 6RNR straight after he landed. (Click here for more details) 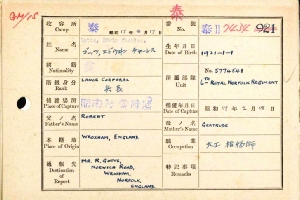 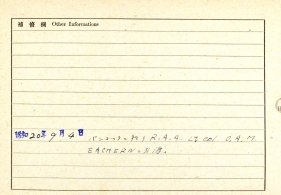 This is Edwin’s Index card, compiled on 17 August 1942, and shows him at Thailand Camp 2 (top right). We know from a debriefing interview after the war that he was in Ban Pong camp at the start of the Burma Railway then.

From the same debriefing interview we know he was moved nine times between camps, but the Index card reverse does not show any, only his liberation date of 4 Sept 1945. So we cannot rely on the cards to know where soldiers were, again because of the Japanese army’s lack of respect for informing anyone about their prisoners.

Edwin spent two years working on the Burma railway, but not doing the heavy lifting. His daughter Cynthia Nisbet says he had carpentry skills and the Japanese made use of him for making shoes and other things. It didn't mean he got treated better than the others because when he returned home in 1946 he weight 6 1/2 stone which is not much for a man of 6' 3". Berri Berri was rife as was sickness and diarrhoea.

He told her that “He and a mate got into trouble once and the Japanese were not best pleased with whatever they had done and they shot Dad’s mate and Dad had to dig his grave and bury him”. To think that could have been the other way around.

You can understand that if that is the sort of treatment he witnessed it's not surprising he never talked about it.

See next page for more details of the camps 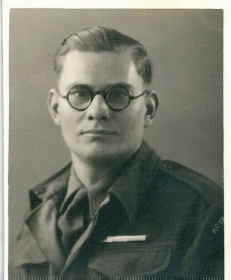 He will have started in Changi POW Camp, but he was in the first draft of POWs to be transferred to Thailand on 25 June 1942. This list shows Edwin as having gone Overland (OVL) to Thailand. His initials were incorrectly typed then corrected by pen later. It also shows ‘LC’ Gotts (Leslie George) was in Changi, and Pte Stanley Gotts was dead as of the handwritten date. At this point I do not know whether these lists were maintained by the Army or whether they were the start of records by the Japanese, assisted by POWs.