The battles for Malaya and Singapore

3000 Japanese lived in Singapore in 1941, and 600 were withdrawn to Japan in October that year. The defensive guns pointed out to sea and only had shells suitable for sinking ships, and any earlier observations that an invasion would come by land from the North were derided. The Japanese already had a British secret report stating that Singapore needed 40 Battalions and 350 warplanes, but only had 20 battalions of British, Indian and Australian troops and 90 ancient airplanes. Britain’s focus was the war in Europe, so could not keep enough troops there to survive an attack, but planned to hold on long enough for the main fleet to arrive.

The invasion used the Japanese Imperial Guards, the best fighters in their army who could live off the jungle and move very quickly. They found that bicycles were very useful on the paved roads installed by the British in Malaya, and their 90 small tanks could drive through the regularly-planted rubber plantations, making rapid progress. The Zero airplanes outclassed even the Hurricanes that eventually arrived with 18th Division, demolished our air superiority and sank the warships already there.

By February the Japanese has swept through the rest of Malaya, taking many prisoners as they went. Many sick and wounded were left during the retreat, but many of them were not left alive by the Japanese. Somehow Leslie George was not affected by this. The Japanese were attacking the Alexandra Hospital on the south coast of Singapore when the surrender was made on 15 February. 30,000 Japanese soldiers had outfought and overwhelmed 80,000 British and Commonwealth troops, many inexperienced in battle and unprepared for jungle warfare.

At this point there was much scavenging for food on both sides. The Japanese did not have a strong supply line, hence it had been key to win the war quickly.

Over the next few days all British civilians and soldiers were gradually marched to Changi at the East of the island. 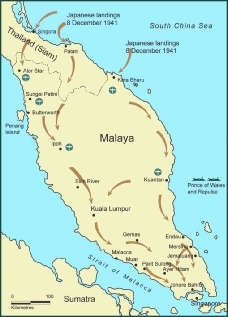 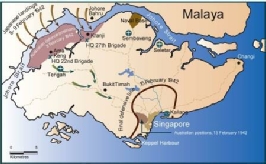 It took the Japanese only 6 weeks to fight their way 600 km to Ayer Hitam, moving very rapidly. Three days after landing in Singapore, 5RNR and 6RNR were fighting there. Leslie George (4232 #034) was on patrol on 23 January, and was shot in the head. See the next page for more information on Leslie.