James Atkinson Gotts is my father, one of two cousins of that name, named after their uncle who died on the first day of the Somme. He was born in 1911 to George & Jane Ann Reah.

He was single, living in Seaton Delaval in Northumberland and cycling to Ashington to teach Woodwork when he was called up to join the Territorial Army on 7 October 1940. He reported to Croft, near Catterick in Yorkshire on 7 October 1940, was medically examined on 9 October, and assigned to 222 Field Ambulance. 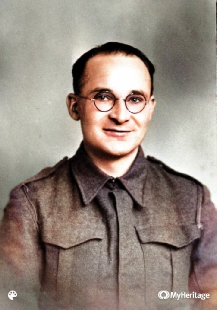 (I suspect he had a choice in which unit he joined, as he was a staunch Methodist, and I could imagine him asking for a role serving the wounded rather than front-line fighting. One of the BBC interviews describes someone given options on joining. )

He was not mustered full-time at Croft until 28 April 1941, possibly because of the number of people called up. One can presume that a large number of men were being called up in order to prepare them for a future assault into Europe, and that there would be a finite number of training places available, hence a six month schedule.

He spent the next two years in Britain being trained, though the Army records are thin. Battalion Diaries were not kept for armies on Home soil, so his whereabouts are only known by the odd reference in his service records and by letters and postcards sent home and to relatives from Wick, Tenby, New Quay (in Wales). He talked about tickling salmon somewhere, which could easily have been at Wick, with his friend Iain Hosie. He passed his medical training No 2 in Nov 1942, and No 1 in Dec 1943.

What is interesting is this photo of him in hot climate uniform.  My sister recollects him saying that they were scheduled to go to Singapore, but this was cancelled. He reckoned that he would have been there when it was invaded by the Japanese on 15 February 1942. Given the fate of the other three Gottses who were there, the outcome would likely be that this article would never have been written. One died in the concentration camp at Changi (Stanley Herbert), and the other two  survived but were changed people. 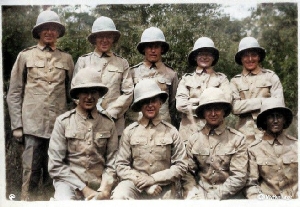 Dad and others in hot climate uniform.

The album containing the photo has 'Clervaux March '41' alongside. This could be a suburb of Croft-on-Tees where they trained.