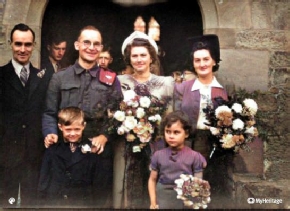 During that time he married my mother Dorothy in 1942, though we aren't sure who was the best man. (on LHS).

By then he was in 23 Light Field Ambulance who were part of 34 Armoured Brigade based around Hindhead in Surrey, and exercising on the South Coast during 1944. Mam stayed with some friends in Blandford in Dorset, so she must have been able to see Dad at some point. Again, it is only through very small connections that we can see where he was.

He also was still in England for the birth of my sister Linda, but it is clear from a letter home in Sept 1944 that he had not yet seen her, despite him not being that far away he had not been able to have leave. As he did not return to England until February 1945 she would have been close to one year old by then.

The work in RAMC

Many saw these troops as ‘Stretcher Bearers’, because this was their most likely way of seeing them in action unless they had been a casualty themselves. Whilst regiments had their own stretcher-bearers, more were needed once casualties occurred during significant fighting. In RAMC there appear to have been a mixture of doctors and nurses who manned Clearing Stations and Field Hospitals, and regulars soldiers well trained in treating the sick and recovering battle casualties. They would carry out First Aid in situ on casualties, such as applying splints for broken limbs, and staunching blood flow. Part of the role was to set up relay points from the casualties to any ambulance, so that for any distance it was possible for the bearers to repeatedly cover the same ground, getting some respite in between carrying a stretcher over rough ground. Once casualties were in field hospitals, the soldiers would assist in surgical operations. Dad recollected assisting with one operation where the casualty had been shot, however the bullet had been stopped by a metal tin (presumably a cigarette tin) in his breast pocket instead of going through his heart.

The BBC has collected over 40 interviews with RAMC staff covering all sorts of aspects:

In this photo they are in full combat dress. It appears to be labelled as at Backworth, near Seaton Delaval. This is Backworth Hall in the background. That would suggest that they were exercising in the area. 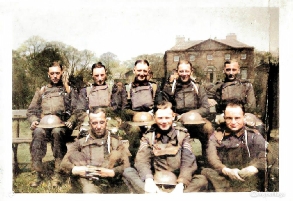