Record of ships in which Jim served

His service record shows Jim on board HMS Cyclops, a submarine depot ship for 7th Submarine Flotilla based in Rothesay on the Isle of Bute, Scotland, from 5 November 1940 to 23 Oct 1941.  Jim spent some of this time training in anti-submarine warfare based in Scotland. Uboat.net notes three training exercises in the Clyde estuary where HMS Cyclops was the target for convoy attack training in June 1941.

In 1987 Russia issued medals to those who had taken part in supporting them with convoys. This is Jim Gotts’s medal and the presentation card. The text is: 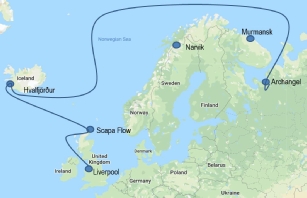 In June 1941, Germany invaded its partner Russia as well as Finland. In order to help the Russians resist, it was decided to send it munitions. The first convoy was called Operation Dervish.

On 12 August 1941, HMS Electra sailed from Liverpool with two anti-submarine trawlers to escort six merchant ships which included 48 Hurricane planes and their crew to defend Murmansk and Archangel. Jim must have been on HMS Electra before 12 August 1941 when it left on the first Russian convoy. He told Alan: ’The sea conditions were so awful that he was pretty much permanently sea sick’.

They went to Scapa Flow in Orkney, then Iceland, followed by a wide sweep into the Atlantic to avoid German warships at Narvik. They unloaded at Archangel 31 August as Murmansk was within fighter distance of German planes at Narvik.

As it was the first convoy, the Germans did not know about it, and it was uneventful, unlike subsequent ones. Whilst it would be cold, it may not have caused the ships to ice up in the way later convoys would through the winter. 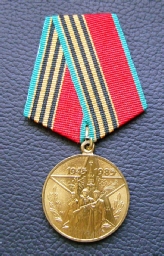 Military wikia notes that ‘it had a distilling plant for fresh water, machinery, carpenters' and blacksmiths' shops, coppersmiths', iron, and brass foundrys.’

Bute_at_war adds: ‘Wrens worked on board mostly performing administrative duties. Cooks and stewards on Cyclops were Maltese, where Cyclops had been in 1939.  95% of all British submariners trained in Rothesay.’