Next pageContinued on next page

HMS Electra and Jim in the Far East

HMS Electra left Greenock with the battleship HMS Prince of Wales and destroyer HMS Express on 25 October 1941 and reached Singapore on 2 December together with the battlecruiser HMS Repulse. They had little time for any repairs before they were attacked on 8 December by Japanese planes. 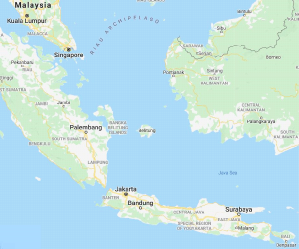 For several weeks HMS Electra escorted convoys to and from Bombay, bringing troops and their equipment. On 13 February, recognising that Singapore would fall, HMS Electra escorted several merchant ships to Tanjong Priok harbour at Jakarta, then known as Batavia. On 25 Feb the naval ships moved to Surabaya, further down the north coast of Java, and joined the Dutch Eastern Strike Force, arriving early on 26 Feb.

Later that day they heard that Pearl Harbour had been attacked and Force Z set sail including HMS Prince of Wales, Repulse, Electra, Express and two other destroyers.

They were to investigate Japanese landings in eastern Malaya and protect against the Japanese fleet.

This is HMS Prince of Wales sinking with scrambling nets and lines, probably to HMS Express who came alongside to starboard to take off men.

This was a huge blow to lose the Rotal Navy’s two biggest warships. 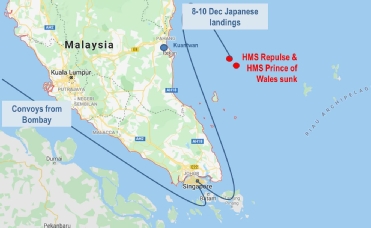 On 9 January they had been spotted by the Japanese who attacked at dawn on 10th. Both HMS Repulse and Prince of Wales were sunk by air-launched torpedoes off Kuantan, while HMS Electra was between them. They picked up 500 survivors from Repulse before heading back to Singapore. Several of the wounded would later become prisoners of war when Singapore fell.