As it happens there is a Red Cross card for him. It shows his regimental number as 15127 in the Royal West Surrey Regiment, and the date he disappeared. The 'negatif envoyé' 22/10/17 means they wrote to the next of kin to say they have found no information about him. The next of kin is very interesting though: it is his mother, Mrs A Gotts, of 113 Star Lane, Canning Town, London E 16. She has probably written to them asking if they have any details, as he had been presumed dead.

This is the Arras Memorial. Because the bays are on the back walls underneath the ceilings, and the inscriptions are not highlighted in black paint, it is very difficult to get a clear photo. 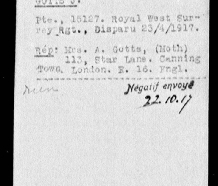 Marion Auffret has spotted a John George Gotts, born in Stepney in 1897, to Annie Isabella 3200. In 1911 they are living at 13 B Juniper Street, Shadwell, Stepney, Annie a widow and her son known as John. They are in tree 109,

Now we have the Soldier’s effects record on Ancestry, we have one for John which confirms his mother Ann as the recipient of £3/4/5d followed by War Gratuity of £9/10/-. So I think we can be clear that this is John George 3201.

See the next page for how he lost his life.