The Battalion diaries for 1st Bn Queen's Royal West Surrey Regiment is online, so we can see what they were doing on 23rd April 1917. This is a map of the area at Croisilles, about 15 km South-east of Arras, with the 1917 trench map markings added: 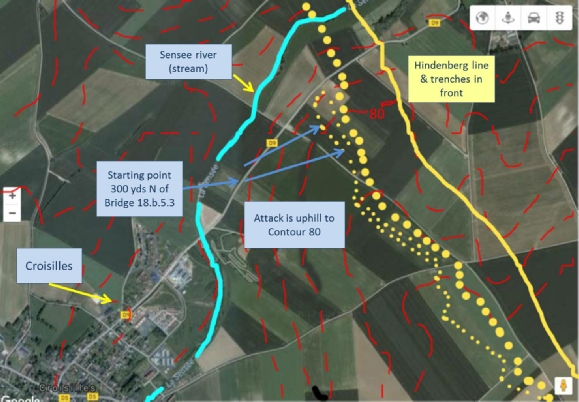 The attack took place by following the Sensee river North (a stream when I saw it) and then striking up the hill against the German trenches in front fo the Hindenberg line, This is where the German army had withdrawn to in April 1917. 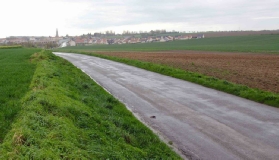 Looking North-east from where the Croisilles to Fontaine-les-Croisilles road crosses La Sensee.

Looking South-west down from the Hindenberg line with La Sensee running just beyond the ploughed field.

The battalion was to start about 300 yards north of the little bridge, then attack uphill towards the German lines. These were on the top of the hill, with trenches just in front of the Hindenberg line.

The attack was supposed to happen in conjunction with the Kings Rifles and the Worcesters, with two waves 50 yards apart. Two tanks were supposed to support them, all of this to follow a creeping barrage, which of course never did its job.

They managed to take the first line, but had heavy casualties. They could not supply bombs fast enough, and eventually retreated back to their original positions.

John George was one of the casualties.