Sidney was born in Newton St Faiths in 1889, though his service records states 1890. According to Ernest Gotts, Sidney was a handful at home and was ‘invited’ to Canada. There is a possible passenger record around 1905 when he would be 16 which may be when he went.

1st Reserve Park Army Service Corps was also known as the 1st Canadian Army Auxiliary Horse Transport Company. They had about 90 waggons with both heavy and lighter horseshorses to draw them, and soldiers like Sidney to drive them.

Their first few weeks at Valcartier training would have been cold and wet. Apparently it was usually a few degrees colder there than surrounding places. Here they practised basic skills such as marching, how to wear the uniform, looking after horses and waggons, and becoming part of a fighting and Services unit.

They embarked for England as part of the fleet of 30 liners bringing the whole of the Division to England, arrived at Devonport (Plymouth) 14 Oct 1914 and went by train to Amesbury in Wiltshire. Here they stayed as the army trained and prepared itself for fighting and their role in the war. Reading the war diaries it was often wet, muddy and cold.  They had to deal with shortage of equipment such as reins and saddles, horseshoes, and the wrong type of horse: many Canadian horses were able to pull 1 ton on good roads, but in France they would have to pull one and a half tons over long distances in mud.  Many died of pneumonia through lack of proper exercise. 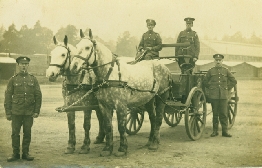 He enlisted on 22 Sept 1914 at Valcartier, the main enlistment and training establishment, into the 1st Reserve Park Army Service Corps (ASC). His address at the time of enlistment was 13 Lincoln St, Hamilton, Ontario.

He served for nearly 5 years, transferring to the 1st Division Train in October 1916, and was demobilised as a Driver on 26 April 1919.

His service record does not show much about his service except key dates, only that he had broken his arm in 1903, and was never on the sick list.

What provides much more insight are the war diaries of his units, which are available in the Library and Archive of Canada. 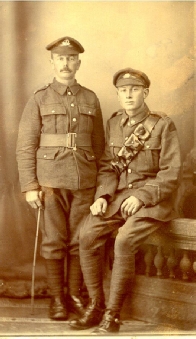 Sidney is on the right, next to his brother Albert Ernest who served in the English Army.

Thanks to Ernest Gotts for the photo.