Bertie fought in France in WWI, was gassed in France, later went to fight in Mesopotamia against the Turks. When on leave he travelled in India.

Bertie Gotts and Olive Dowsing married and moved to Canada, establishing a homestead near Abernethy, Saskatchewan.

During the Second World War, Bertie was a camp guard at a German POW camp in the Kananaskis area of Alberta, about 60 km west of Calgary.  After that he became a diesel engine engineer, and worked at the Steep Rock mine in Atikokan, Ontario, where they retired.

Bertie and Olive died around 1980. Their ashes were taken back to Stiffkey where they came from by their son Robert. Their family live in Canada.

(Thanks to Chuck Newyar for this update) 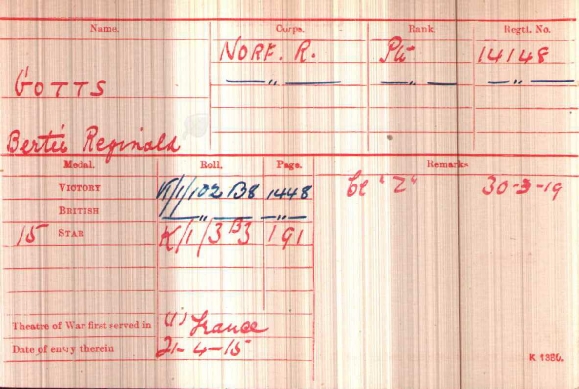 This is Bertie’s record card. It shows he first served in France in April 1915 and was demobbed 30 March 1919, so fighting for the whole of the war.

So he must have been based in Ireland when the war started, was mobilised in August, served in many of the key battles (Mons, Marne, Aisne) until wounded. He then joined the 2 Bn in Mesopotamia for the rest of the war.