Clarence Augustus 1862 was born in 1899 in West Ham, London, son of Augustus James A and Emily Louisa nee Purcell.

CWGC records him as Private, no.31122 in 11th Bn., East Lancashire Regiment

Augustus James didn’t die until 1925, so this statement may post-date his death.

Again, Clarence is recorded on the Arras Memorial, so it is difficult to photograph it. Here he is on Bay 6:

The 11th Battalion were the "Accrington Pals": Service battalion formed September 1914 by the mayor and corporation of Accrington. They saw service in Egypt December 1915 – March 1916, Western Front March 1916 – 1918.

The Accrington Pals were seriously reduced on 1 July 1916 at the Somme, but they were only one company of the 11th.

“The 11th East Lancashires earned particular distinction near Ayette (14 km NW of Bapaume)  on 27th March 1918 in a day of desperate close-quarter fighting in which the Germans stormed the ‘Pals’ position again and again with heavy losses on both sides, including 350 of the ‘Accrington Pals’ killed, wounded or missing.” (Source: Lancashire Infantry Museum) 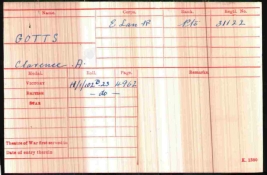 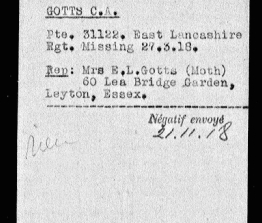 The Red Cross card shows the details we already know, so he must have been reported missing, and his mother has written to the Red Cross to see if he was captured. They replied 8 months later.

The Soldiers Effects register shows his father Augustus was still alive then.