When you read the Battalion diary, they were in trenches at Ferme du Bois from 17-21 Feb 1917 when the frost thawed, making the trenches full of mud. Having been there in April, this area is very flat, very wet, with ditches full of after alongside all the fields, so it would have been a quagmire.This is a composite picture from the road to Ferme du Bois.

This is the trenchmap showing what they had to do in the early morning of 27th Feb 1917. Ferme du Bois is just below bottom right. 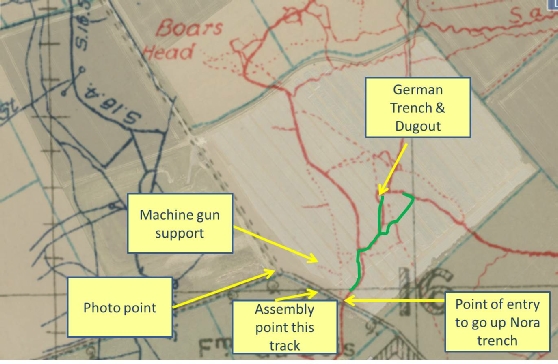 Their objective was to take a German dugout which had a machine gun, via a trench called Nora, and follow the green line to the dugout. This would have been on the edge of the field of polythene in the photo. You can read their objectives at the end of the battalion diary.

Because this ground is so flat, the Germans had seen them massing at the assembly point, and when they got into No-Man’s Land they put up two Very lights which illuminated them, even though they were lying very flat. The Germans ran to their front line, but the OC Raid Capt EC Kelly believed that while the British bombardment of their front line they had time to rush across and be ready for when the Germans came out.

However the Germans were ready for them when they got to the trench, and repelled the raiding party, leaving 2 dead and 1 wounded at the German trench, and everyone else returned, though with 18 more wounded.

I know from other searches on the web that George was not the wounded soldier left at the trench, so he was one of the two killed there.

Continued on next page…..