This website has more detail of the battle during this time

Maxwell was involved in what was known as the Battle of the Somme Crossings.

The German Army, freed from defending the Eastern front, was pouring troops into the Western front. A huge push was being made towards Amiens ahead of the US troops being actively deployed in huge numbers.This would have allowed the German Army to deliver troops faster and further into France by train.

Though the diary does not record numbers of casualties, across the period of 23 March to 5 April the armies in this area had 15,000 deaths and the Germans advanced 40 miles westward.

Maxwell died on 25 March, so somewhere in the retreat from Epenancourt to Marchelepot is the most likely. His grave says he died near this spot, though we don’t know how close that might be. 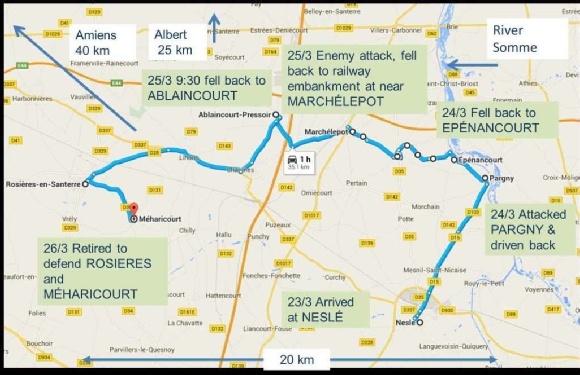