Ginchy, near Guillemont in the Somme area, was the scene of a devastating attack on high ground called ‘The Quadrilateral’. 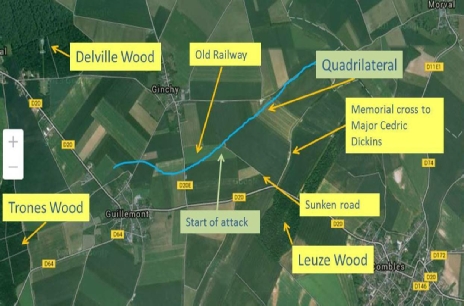 The Quadrilateral is part of the field shown, on higher ground, giving a wide sweep over the land from Ginchy in the west around to the east. On 11 Sept 1916 they came up behind the line at Trones Wood, and spent the night sleeping in shell holes. On 14th at 11 pm they went up to the line, taking over from the Suffolks.

The 9th Norfolk Regiment was mustered about the crossing of the sunken road and the railway, so they were attacking the Quadrilateral to the North-East.

Lyn McDonald's book 'Somme': “three tanks were due to go over 20 minutes before the attack to clear the way. Two broke down and the third lost its way, lurching along beside what its crew took to be a Germans' front line trench they sprayed it with machine gun fire. The trench was packed with soldiers. The kill was enormous. But it was a British assembly trench and the soldiers were men of the 9th Norfolk's waiting to go over the top. This was the first deployment of tanks in WW1.

On that day 431 Other Ranks and 4 officers were killed.

So we do not know whether Marshall Frederick was killed by the tank or during the fighting.

The Bacton and District History Facebook page has details of this and images of Marshall Frederick’s paybook and dogtag:

There is a tiny copse in the middle of the picture, with a memorial cross to Major Cedric Dickens, who died in earlier attacks on the Quadrilateral on 9 Sept 1916