Six other records have his name: The first one is the Medal roll card. This shows his regimental number, the medals awarded and that he was Killed in Action, but not when.

Lastly, at some point after 1919 his parents were send this plaque with his name on, as if they needed reminding of what had happened. This is sometimes called ‘ The Dead Man’s Penny’, but it is the most tangible thing surviving.

The third is the CWGC records:

In Memory of James Atkinson Gotts

This shows the date recorded as missing and his parents’ details.

The fourth record is the Soldiers Effects Register, which shows he was owed £3/8/-, presumably in pay, and this was sent to his father George on 28 February 1917. Later, a War Gratuity of £7 was paid to his father on 17 June 1919. 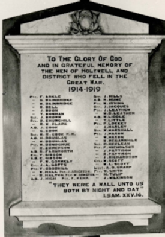 The fifth is the Memorial at St Mary’s church, Holywell, near Seaton Delaval with his name.