So, I know him a bit better now, and I also know what a terrible day it was when he died.

But keeping his memory alive, Brian's daughter Ulrike wrote two poems when she was studying WW1 at school, one about James Atkinson and the second about the Tyneside & Scottish Battalions, of which he was a member.

For the Tyneside & Scottish

The darkness grows in my soul,

As I sit and look out from this hole

There is nothing to see, there is no moon

Yet the dawn will be arriving very soon.

Those behind the lines cannot comprehend

The fear and the terror we must face

No one remembers how long we fought

We still hear the screams of those that were caught.

Barbed wire and machine guns too much to bear

The bodies left lying in a field somewhere.

We had little chance, but gained a few feet

A victory it was called, though we thought it a defeat

A thousand men went out there, in such a short time

Those that came back only numbered nine.

For James Atkinson Gotts who fought and died to ensure freedom for future generations.

The War, the War, why did it start?

Now no one wants to take any part.

All this death and all this blood,

We see all this whilst waiting in the mud

What will we see when we get round the bend?

When will this war ever end?

People say we’re as brave as can be

But they wouldn’t say that if they could see what we see.

Sometimes we go without food for days on end

And when we get it you should see what they send.

When will this war ever end?

Some of the corpses have just got bones

Will I ever get home?

You see all the bodies on No Man’s Land

Then you see a moving hand

You bend down fast,

Will this war ever end?

Thanks to Brian and Ulrike Gotts for their help 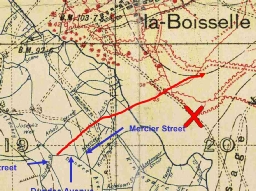 This is the trench map for where he mustered (blue arrows) and walked across the fields up into the enemy machine guns (red line arrow). The line is traced from the Battalion diary movements. ‘X’ marks the ‘Lochnagar Crater’.

And this is the scene now looking down the hill from the enemy trenches at the top of the map. It may only be 100-150 feet higher, but has a tremendous advantage. 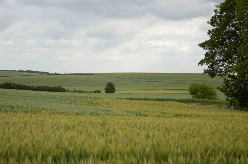