It is noted that the Battalion landed in France in January 1916, and we had believed he was there in November 1915, as he sent several of these silk postcards back to George Willie, his brother. His parents wouldn't have been able to read them, but George would have done this for them. It turns out that there were many souvenir sellers in Salisbury Plain selling these! 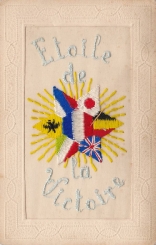 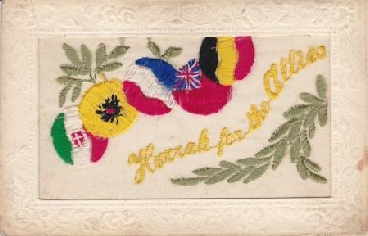 The next we know of James Atkinson is 1 July 1916: the First Battle of the Somme. James became one of the 19,240 killed that day, the highest casualties in any one day in the history of the British Army. As his body was not recovered, one of 489 of 22nd Brigade between 1 & 3 July, he would initially have been listed as missing.

Reports of the battle are distorted. In the Dundee Telegraph and Post of 5 July, the headline says

'Battle of the Somme: Proceeds with Brilliant success'

In the text it then says:

“According to very exact information, our losses have been very small. One village was taken without the loss of any life. One army corps has only had the loss of a few hundreds killed and wounded. These splendid results are due to the efficacy and precision of our destructive fire, which ravaged the enemy's ranks”

...Who's hoping to kid everyone: the army PR people or the newspaper?

However, by 28 July the Newcastle Journal was reporting 2-3 columns of Roll of Honour, each column with 100 killed, missing or wounded at a time. We don't know when James Atkinson's parents were told, but in Newcastle Journal 31 July, a month after he went missing, his name is in the list of over 1200 names of Northern Casualties:

So no doubt about it, the right name, regiment and service number, and his parish.

On one of these he says

Just a few lines hoping to find you well as it leaves me at present. I hope you received your letter all right and also hope this card suits you as it is as pretty one as I could find. They are all pretty one does not no which to pick. Tell them all at home that I send my best respects also to you your wife and family. Bob Elphick is a sergeant in the 14th Northumberlands now. Remember me to all. I think I will now close with all my love Jim”