Anecdotal evidence is that when soldiers were captured they were mistreated to reveal any intelligence of the enemy's intentions, strength and fortifications. This happened on both sides. Also, the German soldiers were slowly starving by 1918 on meagre rations, so POWs would be at least as badly treated. life would have been very hard for Matthew. He was lucky that it was only a matter of months presumably, until they were in better hands.

Cottbus is in Germany, close to the Polish border. I then started trying to find out about Cottbus, the POW camp in Prussia, and found an entry on the Red Cross site: http://grandeguerre.icrc.org/

Firstly on the 'Life in Internment Camps' tab I could see where Cottbus was, and that there were five camps in that area. Clicking on the map it took me to the visit report by ICRC on 18th December 1918, after the armistice. This was partly to understand the conditions in each camp, (given this was after the end of the war and supply chains to the camps could have failed to feed everyone) and partly to see how many Russian soldiers needed repatriating, given that the Russian infrastructure was chaotic because of the 1917 revolution, and there was no equivalent of the Red Cross there to deal with repatriation. 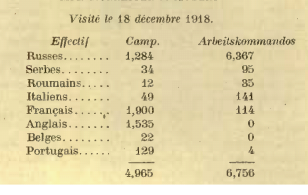 ‘Arbeitskommandos’ were ‘workcamps’, where soldiers (other ranks) were used as labour for commercial enterprises. These were mainly Russian, with none of the 1500 British POWs used for this. However, many of these soldiers were returned into the main camp when the war ended, causing overcrowding.

In October 2020 Robert Bueschel of the Cottbus City Museum contacted me to say they were planning an exhibition about the two main camps in Cottbus, and they wanted to show the other side - the life of the POW.  Nick Gotts has sent him what he knows about his grandfather. Robert provided two photos of Cottbus 1: 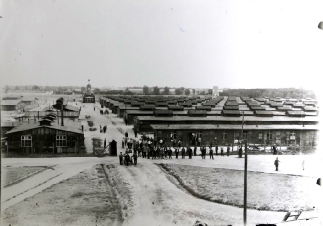 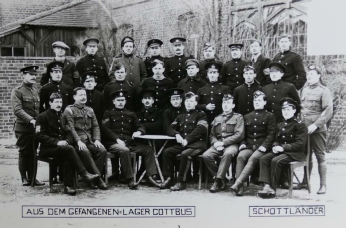 This photo shows the camp layout from the front gate