By 1916 the British front line near the Somme was close to Fricourt, South-East of Albert.

Why 178 Tunnelling Company was formed

After German success in tunnelling the Army deployed 8 tunnelling companies in February 1915, but did not have the resources to deploy more. Instead they turned to miners, and paid a handsome 6 shillings a day (vs 1 shilling for privates).

Nine companies, 170 to 178, were each commanded by a regular Royal Engineers officer.  With 5 officers and 269 sappers; they were aided by additional infantrymen who were temporarily attached to the tunnellers as required, which almost doubled their numbers.

They made their way to Meaulte, between Fricourt and Albert, arriving on 1 September. At this point they had 3 officers and 120 Other Ranks. Their workplace would be Tambour Du Clos and their billets were at Meaulte. The French army had been tunnelling here, so they had 5 days of joint working to hand over, as well as organising infantry to do the heavy lifting of moving spoils from the tunnels to a safe place to avoid giving away where the tunnel entrances were.

From 14 August 1915 to the end of the year the war diary lists 60 deaths out of the 150-200 men working the tunnels, mostly through Gerrnan tunnel mines, with more through accidents with their equipment.

January 1916 was without casualties, but 8 February a German mine buried Matthew Gotts and his fellow worker J Withey at 10.30 am. A rescue party dug them out, but they were too late to save them. 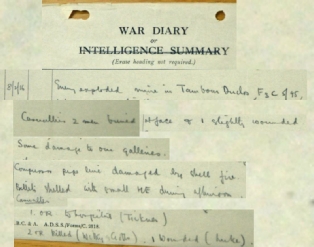 This is the essence of the War Diary on 8 Feb, reshaped to make it easier to read.

Reading the war diary, you see a life of digging the tunnels eastwards as quietly as possible, firing mines and camoflets to blow up the Germans, listening for German activities underground, and losing men to gas and German mines.