HMS Cattistock was a destroyer commissioned in July 1940, with the code L35. It spent time on patrol in the North Sea and English Channel.

What is not clear is when John Thomas joined the ship, although this was the ship he talked most about. He also had a picture of it on the wall for many years.

We know John was on HMS Cattistock on D-Day, escorting FORCE G, moving to the Lowering Point just off GOLD Beach at 0.30. They provided covering bombardment of the beach through the day, and then escorted convoys to and from the Solent for the next weeks.

On 8 July he was able to go ashore and and bought some postcards of the area.

In August 1945 John embarked for Colombo via Suez Canal, which was by then back in use. HMS Mayina was a huge camp in the jungle, a few miles out of Colombo, where thousands of sailors were amassed to form the biggest fleet ever assembled, for an invasion of Japan. Conditions in the camp were reported as grim with water, strictly rationed, delivered to the camp each day by tanker lorries. 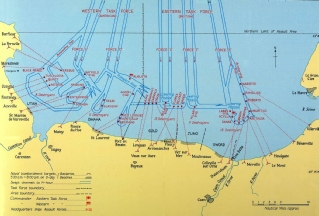 Zoom in on the map for detail

During much of August they were under repair in Portsmouth, so John go the chance to take leave. After that they were back in the English Channel keeping it secure.

On 29 August they intercepted German ships evacuating Le Havre. The shore batteries opened fire and they sustained several hits, one on the bridge which killed the Captain Lieutenant Richard Keddie and 4 others. They were able to return to Portsmouth for some repairs, followed by Chatham Dockyard. It returned to convoy duty in November . 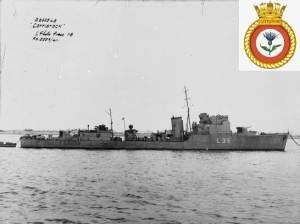 Click here to see a video of life at HMS Mayina

“Although he did not make much fuss about his war service, he did keep a set of his uniform along with two hats, one white, and a kit bag. His collection of photographs along with his copy of a letter from Eisenhower denotes a certain degree of pride and I think that he was proud to have served his country and to have been in the Royal Navy. “ Barbara Adams

The Japanese surrendered on 15 August so John was shipped home.